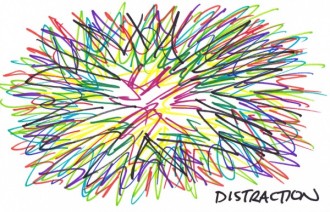 Imagine going out for dinner with friends, and no one pulls out their phone; or trying to remember that name of Robert Downey Jr.’s most recent film without checking Google (Captain America: Civil War); or sitting on a bus and not having your neighbor talking loudly to his mother. Don’t get me wrong — I’m all for using cellphones, google-ing, and calling your mother. But research shows that there is a significant cost of both multi-tasking and being distracted by the phone — cost to brain development, creativity, and happiness.

“Wait, what?” you say. “My brain? My creativity? My happiness? But I can’t get my job done unless I multitask!” It’s time to re-think this.

About job security, according to author and professor Cal Newport,

Shallow tasks like reading and responding to emails or checking social media might prevent you from getting fired, but it’s deep tasks that produce the value and build the skills that get you promoted.

About your effectiveness, according to researchers at Stanford University,

People who are regularly bombarded with several streams of electronic information do not pay attention, control their memory or switch from one job to another as well as those who prefer to complete one task at a time.

Still not convinced? Stanford Professor Clifford Nass, who published his work in the Proceedings of the National Academy of Sciences, says multi-taskers are

suckers for irrelevancy … everything distracts them.

It’s pretty conclusive that you are NOT more effective when you multitask. But I’m also concerned about the long-term impact of this addictive behavior. Using research over intuition, I’ve tried to answer the several questions about what happens when we frequently multitask and are constantly distracted by our phones.

What happens to our:

Have I lost you already? Distracted by that email that popped up? Already convinced and ready to act? Feel free jump to the last section “So Now What?” Or read on about important research into this topic.

WHAT HAPPENS TO IQ?

So maybe you do care. If you’re a frequent media multitasker, part of your brain could be less dense, which means you might have more difficulty making decisions, interacting with people, and you are likely a less empathetic person (less able to understand and share the feelings of another). You are altering your brain structure by multitasking … and that multitasking has already been conclusively proven to be ineffective.

But there’s more. That was about the anterior cingulate cortex used for decision making. Then there’s the hippocampus which is critical to processing, storing and recalling information.  Are you having trouble remembering things? Ever forget someone’s name right after you met them? You’ve probably realized that if you pay attention when you hear their name, and maybe even repeat it out loud, or even create some association (amazing Amanda) then you are more likely to remember it. Now researchers at UCLA have proven that being distracted, perhaps by multitasking, means that “learning facts and concepts will be worse.” In other words, by multitasking, you are impacting your learning systems.

And according to a small early (2005) study on multitasking, Dr. Glenn Wilson of the University of London and the University of Nevada, concluded that distraction causes a temporary drop in IQ of more than 10 points. That means dropping from “very gifted or highly advanced” to “Superior,” or from “high average” to “average” (using the Stanford–Binet Fifth Edition classification).

WHAT HAPPENS TO CREATIVITY?

When you are creating something, you are using all the different parts of your brain. According to Paul King, a computational neuroscientist and Director of Data Science at Quora, “creativity is maximized when information, knowledge, skills, and cognitive styles from all parts of the brain work in coordination to explore and organize as many divergent paths of thinking and feeling as possible.”

How do we get the whole brain working? By not allowing distractions. One analogy, from Margaret Moore, co-author of “Organize Your Mind, Organize Your Life” is that your brain is like a light. “When we (multitask), we scatter the brain’s attention. If you think about the brain’s attention like a spotlight, you use all of your brain: right, left, back, front, top, down … all of it. When you bring all of that to focus on one thing, you’re brilliant …That’s when you get creative, that’s when you have your best ideas, that’s when you get on top of things …” That’s the intensity of a spotlight. But when you multitask and allow distractions, “instead of this nice strong beam, you’re scattering across which means that each thing only gets a little bit of your brain’s resources.”

Having said that you need all of your brain to be creative, I have to admit that there is a counter argument: it’s true that heavy media multi-taskers (HMM) are “suckers for irrelevancy” (see above) and unable to filter out stimuli (see Stanford study below) but free association of apparently irrelevant details (so-called bottom-up control) might be a source of creativity. Indeed, research by Marc and Babette Weksler supports this: “the bottom-up control of the HMM led to a broader-based processing of information and situational awareness that represents a new way of learning that was actually beneficial to creativity.”

So, as much as I want to write that multitasking is always bad, and that creativity cannot thrive, a case can easily be made for both: find creative ideas in random stimuli (which might happen when you are multitasking). But when you need the finish the marketing campaign, job review, blog post, or novel that you are working on, your ability to focus is critical, and the importance of single-tasking is proven.

WHAT ABOUT THE ABILITY TO FOCUS?

And the National Academy of Sciences of the USA agrees that HMMs:

So far we’ve confirmed that focusing on a single task at one time will help your IQ, focus all your attention on the matter-at-hand like a spot light, and with practice, be a sustainable activity. The multitasking or interrupt, bottom-up behavior, can only be considered beneficial in the early stages of creativity. And yet I offer one more reason to give up multi-tasking, which might be the most compelling: happiness.

While the phone can be distracting, it has also become an incredible tool for scientists — whether it’s lifesaving data from the crisis text line, the water rangers app collecting water sample data, or an app to track your happiness. Track your happiness? While I can’t whole heatedly endorse using an app to track your happiness — since it requires you to receive alerts that prompt you to answer several questions, which would be interrupting you — I am thrilled that we now have data to support the importance of being present and focusing on what you are doing right now.

Matt Killingsworth is the scientist behind the track your happiness app. It has provided him with data never before available at this scale. In his TED talk he outlined having over 650,000 real-time reports from over 15,000 people, covering a wide range of countries, ages, and occupations.

It’s worth listening to Killingsworth’s TED talk — he explains the questions in his app, and the results that he found. And he makes a compelling case for staying present because “people are substantially less happy when their minds are wandering than when they’re not” and “mind-wandering very likely seems to be an actual cause, and not merely a consequence, of unhappiness.” So while you’ve probably heard “be here now, ” “be present” or “try meditation,” there is now data to support the centuries old adage to live in the present.

Am I suggesting you never multitask? No. We all multitask, even if it’s as simple as walking and talking. My advice to get you started:

Consider reading Organize Your Mind, Organize Your Life by Dr. Paul Hammerness and Margaret Moore. As I recommend above, the authors suggest “set shifting” (consciously switching to a different task and re-focusing your attention completely) over “multitasking.” For a little insight, watch this video of Margaret Moore talking about organizing your mind. Then read the book.

Deep work is the ability to focus without distraction on a cognitively demanding task. Sound like a worthy pursuit? In his book “Deep Work: Rules for Focused Success in a Distracted World” Cal Newport has created a set of rules that you might consider.

And since you’re taking this seriously (and still reading this), start noticing how many distractions you have. With that information, create your own set of rules around work blocks (focused time for project work), media usage, cell phone limits and managing other interruptions including text alerts. There is a lot of advice on being more productive so try to keep this process as simple as possible. Set aside a few hours and focus on this rule-setting task. You might try some of my suggestions above or go further with a cell-phone free day or rules around how often you check your email. Or you might choose to google less after reading this NY Times article. You might even build an invaluable “Shultz hour” into every week: in the 1980s, even before social media and smart phones ruled our lives, Secretary of State, George Shultz scheduled an interrupt-free hour in his hectic schedule, which he considered “the only way he could find time to think about the strategic aspects of his job.” Uninterrupted time is your real work time.

Be attentive and try small incremental changes to create real and lasting change. And in general, avoid these Five Things You’re Doing that Seem Productive But Aren’t including relying on task management software, delaying making decisions, saying yes to everything, and thinking you can multitask. Especially that last one.