I recently wrote about B Lab and its certified B Corps, which are businesses that focus on more than just the bottom line.  New Belgium Brewery is one of those corporations; its deserving of your support — its the kind of company that the world needs more of.

In 2016 New Belgium opened its second brewery in Asheville, North Carolina. Based in Colorado since its founding in 1991, the move to the east coast was largely spurred by a goal of reducing the environmental impact of cross-country shipping.  In 2009 the company started its east coast search, specifically looking for a “brownfield,”  a property where development is “complicated by the presence or potential presence of a hazardous substance, pollutant, or contaminant.”   A friend who visited the finished Asheville site said the company rescued a vacant lot and created a cool vibrant space that’s now  a social hub in town.  According to county employee Clark Duncan, the county “saw working with New Belgium as a once-in-a-lifetime opportunity to remediate and transform that site and help revitalize a key part of our community”

In addition to seeking a brownfield that they could develop, some of the qualities of the new site that New Belgium was looking for included:

Now, don’t you want companies like this in your community?  I asked Jeff Miller, local resident and famed chef of Asheville’s Luella’s Bar-B-Que if there is another side of the story. His response:  New Belgium “is as shiny as you have read about.  (Its) a tremendous amenity for this community.  They’ve lived up to all of their promises as stewards of the river, being the green sages of their industry, model employer, helping to drive more tourism to the area and actively participating in the community.  It feels like a well run local business…”  Doesn’t this all make you want to buy their beer? I just re-stocked the fridge with Fat Tire and Voodoo Ranger IPA.  New Belgium’s commitment is to:

From all my research, it looks like they’re walking the talk. Their impact report as B Corp in 2015 is even stronger than it was in 2013 (when it was first certified). Some highlights:

Here’s the before and after views of the Asheville site and a brief timeline: 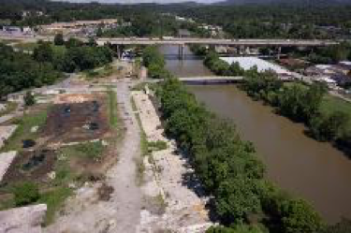 So what does all this mean?  Brownfield site? Salvaging materials?  Neighborly behavior? LEED certification? Trucking sensitive location?  Composting?  Employee owned?  New Belgium exemplifies what being a Certified B Corp means.  So when you go out to buy some beer, and of course drink it responsibly, you can sip it while you enjoy watching CEO and co-founder Kim Jordan talk about New Belgium in this somewhat timeless TEDx talk in 2011.